A year ago, Donald Trump was inaugurated as the 45th President of the United States. Tonight, as the clock crossed midnight, the first year of his presidency ended with a Trump government shutdown. The “great deal maker”, unsurprisingly, is not really much of a deal maker at all. In fact, he had a bi-partisan deal brought to his desk that both parties were ready to sign. But he managed to derail that deal as part of his “s—hole countries” blowout. (I’ve written before about how to avoid a government shutdown, but I failed to note the importance of having a competent president.)

Also, unsurprisingly, the president is blaming the Democrats for his inability to broker a deal. A prepared statement released by the Whitehouse at midnight called the shutdown the “Schumer Shutdown” and calls Democratic senators “obstructionist losers, not legislators.”

There are reports of Trump being furious, tonight. But not about the shutdown. Rather, he is upset that his plans for a big $100K per plate anniversary party at Mar-a-Lago are being disrupted. Instead of spending the day surrounded by fawning (and check writing) suck-ups, he’ll be trying to spin why his inability to avoid the Trump government shutdown is a great thing—maybe the best ever.

A year ago, the stable genius was boasting about how he (and he alone), author of The Art of the Deal, was going to change the way Washington works by “draining the swamp” and making “winning deals”.  So many deals, in fact, that we’d be “sick of winning” by now.

We can state, empirically, that isn’t happening. He changed the way Washington works–for the worse. Rather than draining the swamp, he built a Kakistocracy. Rather than uniting the country and being “president of all Americans,” partisan brinksmanship–and outright lying–is at an all-time high.

The enduring image of Trump’s first anniversary as president will be that of senators scrambling, in vain, to make a deal to stave off the Trump government shutdown.

It’s been a year. Happy anniversary, America. Tired of winning yet? 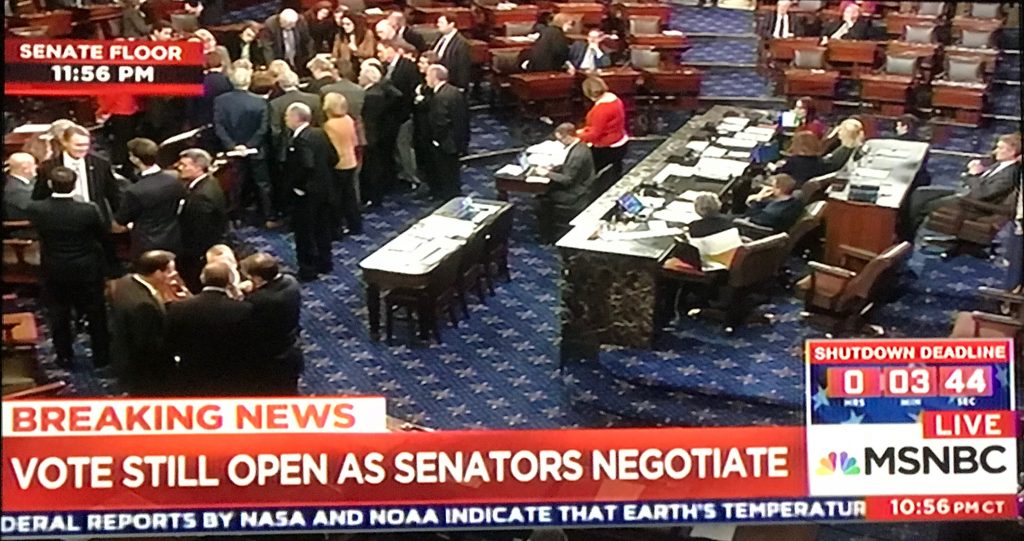 Senators Scramble in Vain to Stave Off the Trump Government Shutdown