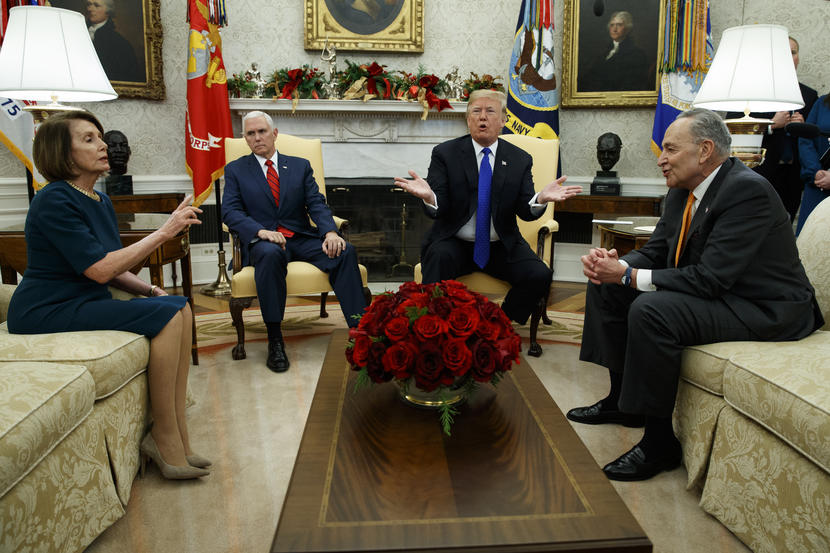 In a recent White House meeting, the president clearly, unambiguously, defiantly, owned the trump shutdown. But today, the president of the United States it trying to unring the bell.

The president is desperate. He is desperate to satisfy his base with his promise to build a wall. Of course, he also promised (over and over again) that Mexico would pay for the wall. But that was never going to happen. And when that reality became clear, even to the president, he began calling for tax dollars to build the wall. However, building a “great big, beautiful, physical, concrete wall” across our entire southern border makes no sense whatsoever. When it became likely–very likely–that the president would not have the votes to fund his wall, his lizard brain did what it always does when things don’t go his way… talk tough, bully, and make threats.

This is not the first time for trump to preside over a government shutdown. But it is the first time he stridently takes full responsibility for it. In a recent meeting with Democratic Leadership (and a semi-conscious Mike Pence), the president, as he is wont to do, blurted bluster for the cameras without consideration of the actual impact of his words:

“I am proud to shut down the government for border security, Chuck, because the people of this country don’t want criminals and people that have lots of problems and drugs pouring into our country. So I will take the mantle. I will be the one to shut it down. I’m not going to blame you for it…. I will take the mantle of shutting down.”

Now, today, just hours ahead of the trump shutdown actually occurring, the president is trying to shift the responsibility for the trump shutdown to the Democrats. This morning, he took to his favorite communication medium, Twitter…

The Democrats now own the shutdown!

Mitch, use the Nuclear Option and get it done! Our Country is counting on you!

Shutdown today if Democrats do not vote for Border Security!

Senator Mitch McConnell should fight for the Wall and Border Security as hard as he fought for anything. He will need Democrat votes, but as shown in the House, good things happen. If enough Dems don’t vote, it will be a Democrat Shutdown! House Republicans were great yesterday!

But, it’s not going to work. This is the trump shutdown. He owns it. His temper tantrum will hurt many Americans during this holiday season. It will cost us all millions of dollars in lost productivity. But most of all, it demonstrates, yet again, that our president is not a competent deal maker, is unfit to lead, and unqualified for the office he holds.