The President, Donald Trump, proclaimed this day, January 16, 2018, to be Religious Freedom Day. 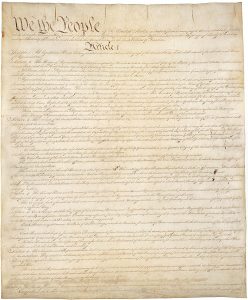 Religious Freedom Day is, in the president’s words, a day when we…

… celebrate the many faiths that make up our country, and we commemorate the 232nd anniversary of the passing of a State law that has shaped and secured our cherished legacy of religious liberty.

This is a fine idea. Even as an atheist, I celebrate our religious freedom as a vital guiding principle for our country. The First Amendment to our Constitution sets forth this freedom, clearly and unambiguously:

Congress shall make no law respecting an establishment of religion, or prohibiting the free exercise thereof; or abridging the freedom of speech, or of the press; or the right of the people peaceably to assemble, and to petition the Government for a redress of grievances.

This amendment makes it clear that our government shall never impose any religion on us. Nor shall it prevent us from exercising (or not exercising) a religion. It also, conspicuously, does not state, suggest, or imply that one’s religious beliefs supersede, invalidate, or overrule the rule of law.

One might quibble (as I do) over several details in the president’s proclamation regarding the role of religious faith and a god in both the founding and ongoing operation of our country. But, President Trump got one point absolutely and terribly wrong:

No American — whether a nun, nurse, baker, or business owner — should be forced to choose between the tenets of faith or adherence to the law.

This is simply wrong. It is objectively untrue and dangerous.

Should an American citizen, be permitted to marry several 9-year-old girls? What if doing so were a tenet of his faith? Should a brother be permitted to kill his 16-year-old sister because, according to his deeply held religious faith, she had dishonored her family by having had consensual sex? Should a woman be allowed to firebomb an abortion clinic, killing the resident staff, because she believed–deeply–that the clinic was the work of Satan?

Clearly, for any reasonable person, the answer to each of these questions is, “No.” I suspect even Donald Trump would posit that.

Religious Freedom and the Rule of Law

America is a land of freedoms. But it is also a land of laws. When our myriad freedoms create conflicts, as they surely from time to time will, we resolve such conflicts peacefully, judiciously. We solve them not per this religion or that, not per a faith in this deity or that, but according to our shared set of democratically crafted laws.

The greatness of America rests, in large part, on our respect for the rule of law. In today’s Religious Freedom Day proclamation, President Trump undercuts that respect. He suggests religious faith has the power–and the right–to supersede the rule of law. This is not only historically inaccurate but is also a dangerous move toward an American Theocracy.